Rats are one of the most destructive pests known to man. Not only do they carry disease and contaminate food, they can also inflict serious bites to humans. Like their smaller cousin the mouse, rats are most active under the cover of darkness.

Holes chewed in food boxes and bags, along with nearby trails of droppings, are evidence of the presence of rats. Sealing the gaps and cracks that they use for access, and keeping food and refuse in tightly sealed containers, will help prevent infestations. 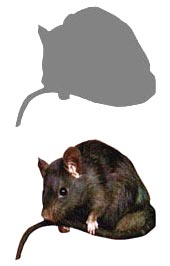 Our internationally recognized K-9 detection team will inspect your home or business for rats and other pests. Call 905-761-9388 or 877-507-0642 to schedule an appointment or submit an Inspection Request Form today!

How do I recognize a rat?

The Norway rat – also known as the brown, house, barn, sewer or wharf rat, is dull brown in colour and measures between 32 cm and 43 cm (12-1/2" to 17") from nose to tail. It has small, close-set ears, a blunt muzzle, and very sharp teeth. The Norway rat is common throughout North America, with the exception of Alberta, Canada (where large-scale treatment programs have kept the Norway rat under control). Another common species of rat is the smaller, grey-coloured roof rat, which is found principally in coastal areas.

Are rats hazardous to humans?

Yes. Rats are a serious hazard to public health. Aside from contaminating food with their droppings and urine, fleas from rats were responsible for spreading the bubonic plague. Diseases as salmonella bacteria (food poisoning), leptospira (jaundice), and typhus are commonly being spread by rats. Because of their unsanitary habits, secondary infections from rat bites can be serious and sometimes fatal. An infestation of rats must not be tolerated.

When are rats most common?

Rats are year-round pests. Under certain conditions, rats can survive outdoors during the winter, however activity and indoor migration increases as weather gets cooler and outdoor food and water sources decrease. Rats are most active during the evening and remain so until the middle of the night. If food and water are scarce, or in the case of large infestations, rats become active during daylight hours.

Where do rats build nests?

Rats nest in any safe location near food and water. Outdoors, rats burrow into the ground. Indoors, nesting occurs in double walls, between ceilings and floors, in closed-in areas around counters, and anywhere rubbish is allowed to accumulate.

What are their breeding habits? Do rats multiply quickly?

The average life span of a rat is 18 months. Young are born about 22 days after mating and mature rapidly. Single females may have as many as 6 litters per year, averaging 6 to 14 young each. By 3 months of age, the young are independent and capable of reproduction. If not controlled, an infestation of rats will rapidly increase.

Do Rats die off in cold months?

No. Rats can survive outdoors during the winter under certain conditions, but generally invade buildings when the weather turns cold.

If I have an infestation of mice, what can I do to eliminate them?

Rats will invade almost any home or business, however it is the presence of unsanitary conditions that encourages their activity. All goods must be stored in properly sealed jars or tins and waste should be prevented from accumulating, or kept in containers with tight-fitting lids. Seal all openings to the outside, including wood around doors and windows; repair masonry and seal openings for utility lines, conduits, and drains.

Depending on the severity of the infestation, a single control measure may not be effective and an integrated program, conducted by a Purity Pest Control professional, may be required.